These little beauties are also known as French Madeleines and are usually made in a madeleine tin which you can buy in most shops. They are pretty shell shaped cakes which can be served plain, dipped in white chocolate, drizzled with lemon icing … lots of ideas. I added lemon rind to mine as there’s no such thing as too much lemon; you could use orange rind if you prefer or add a few drops of almond essence. They are perfect bakes for an Afternoon Tea piled delicately on a pretty cake stand. They also make the most lovely gift in a bag tied with a pretty ribbon. 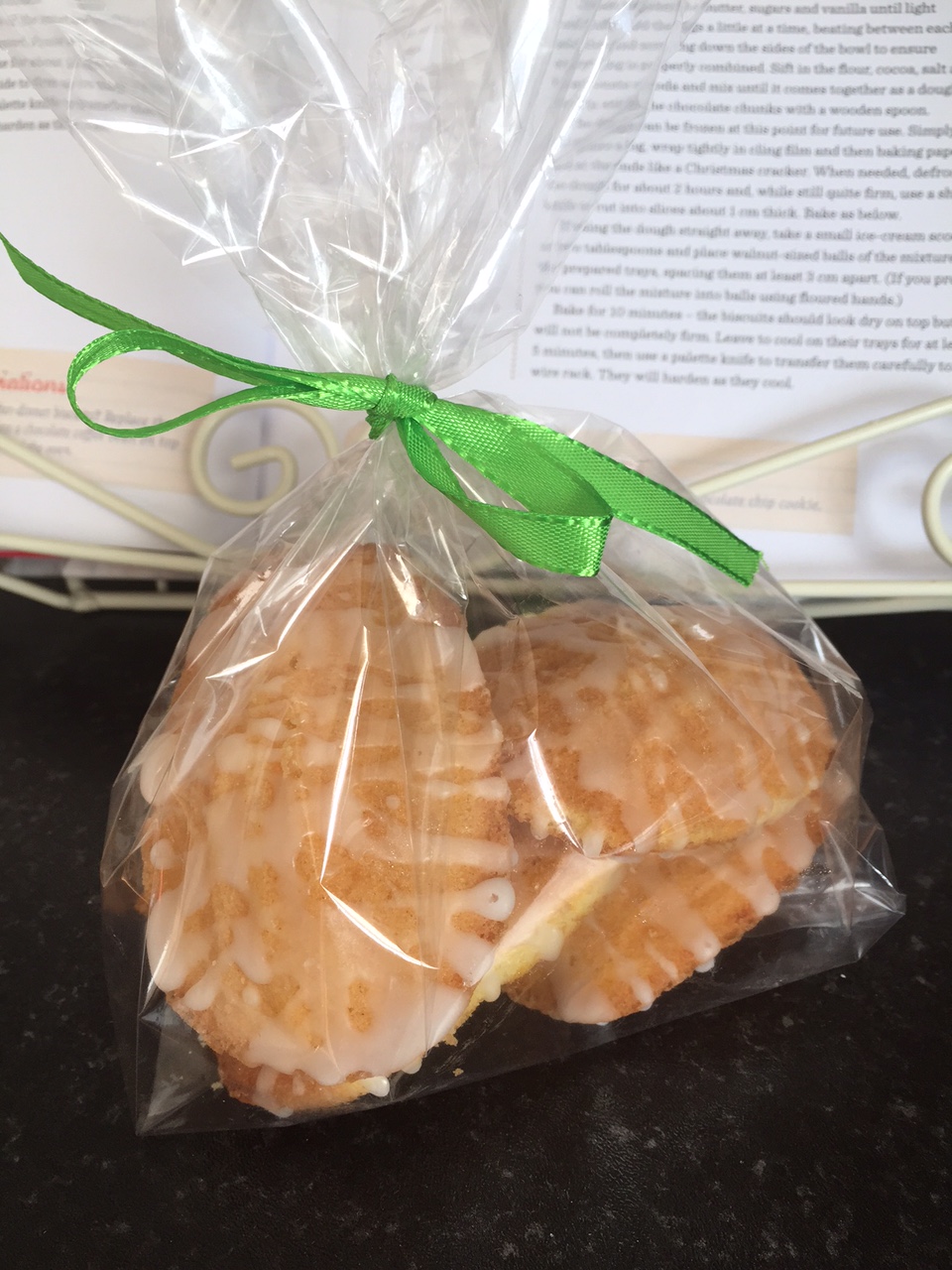 So what’s important to note here is that you give a little attention to greasing and flouring the tin. They will pop right out and the effort will be worth it. I used a cake release spray, brushed it in well and then floured the tins. Also, they are best eaten on the day you make them or the next day but as they only take 8-10 mins in the oven, you can easily make them the morning you need them.

If you don’t have a madeleine tin, you can still make the recipe in cupcake tins; if you have the fluted ones, even better but remember to put the same effort into the greasing and flouring.

The recipe below is for 30 madeleines so what I did was half the recipe and I got 12 full ones out of it; I’ll put those quantities in brackets next to the originals. You will have to grease and flour the tins after each bake if you’re making the full whack and it doesn’t do them any harm sitting waiting for their turn.

Ingredients: (half quantity in brackets)

Preheat the oven to 220C / 200C fan / Gas 7. Grease the madeleine tray well, dust with flour and shake off the excess.

Melt the butter and allow to cool slightly. Place the eggs and sugar in a bowl and whisk until pale and thick. 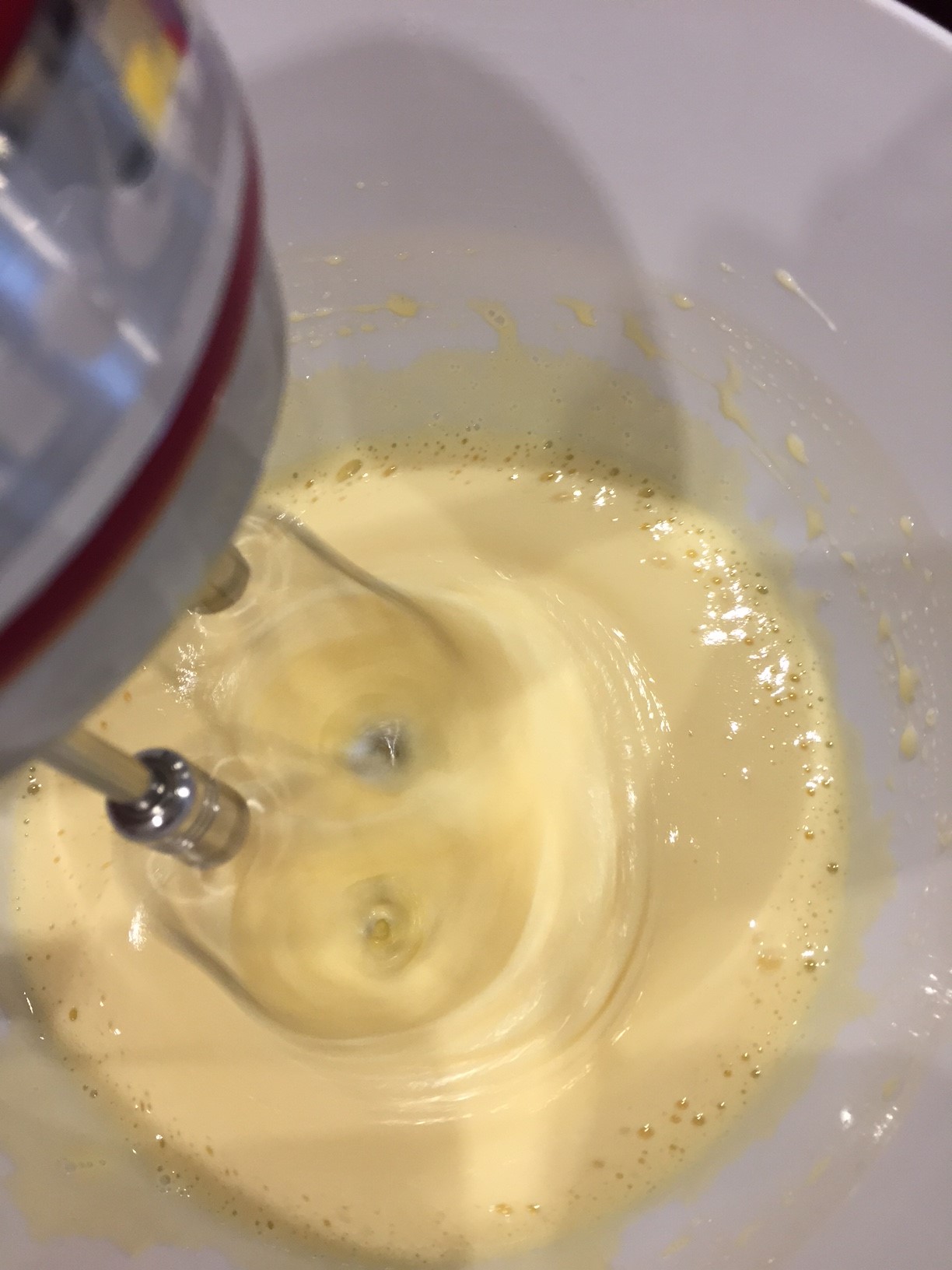 Almost there. You can see how much lighter in colour it is.

Sift in half the flour along with the baking powder and lemon rind and fold in gently. Pour in half the melted butter around the edge of the bowl and fold this in gently. 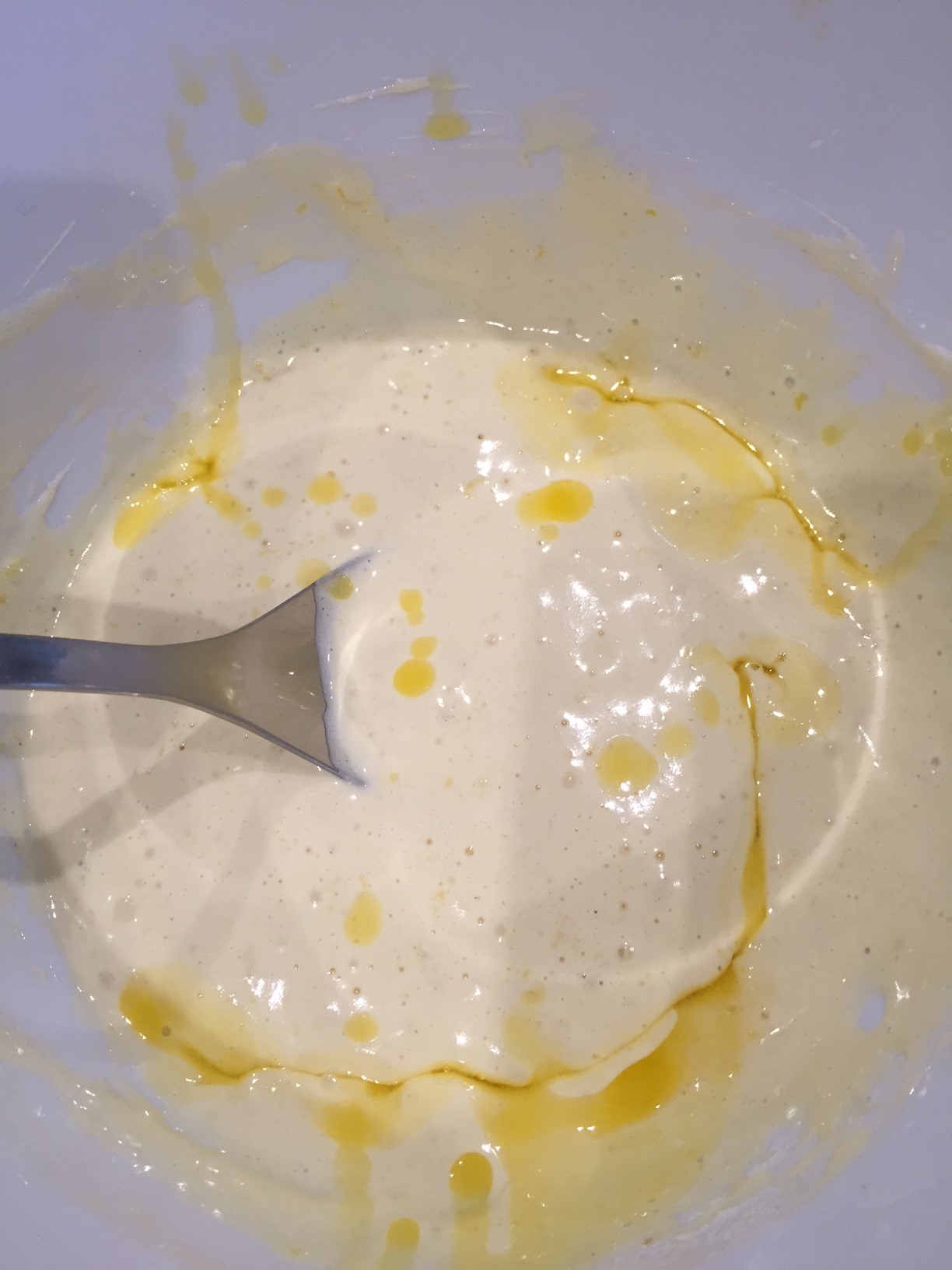 First folding with butter around the edge of the bowl

Repeat the above process with the remaining flour mix and the butter, again adding around the edge of the bowl. 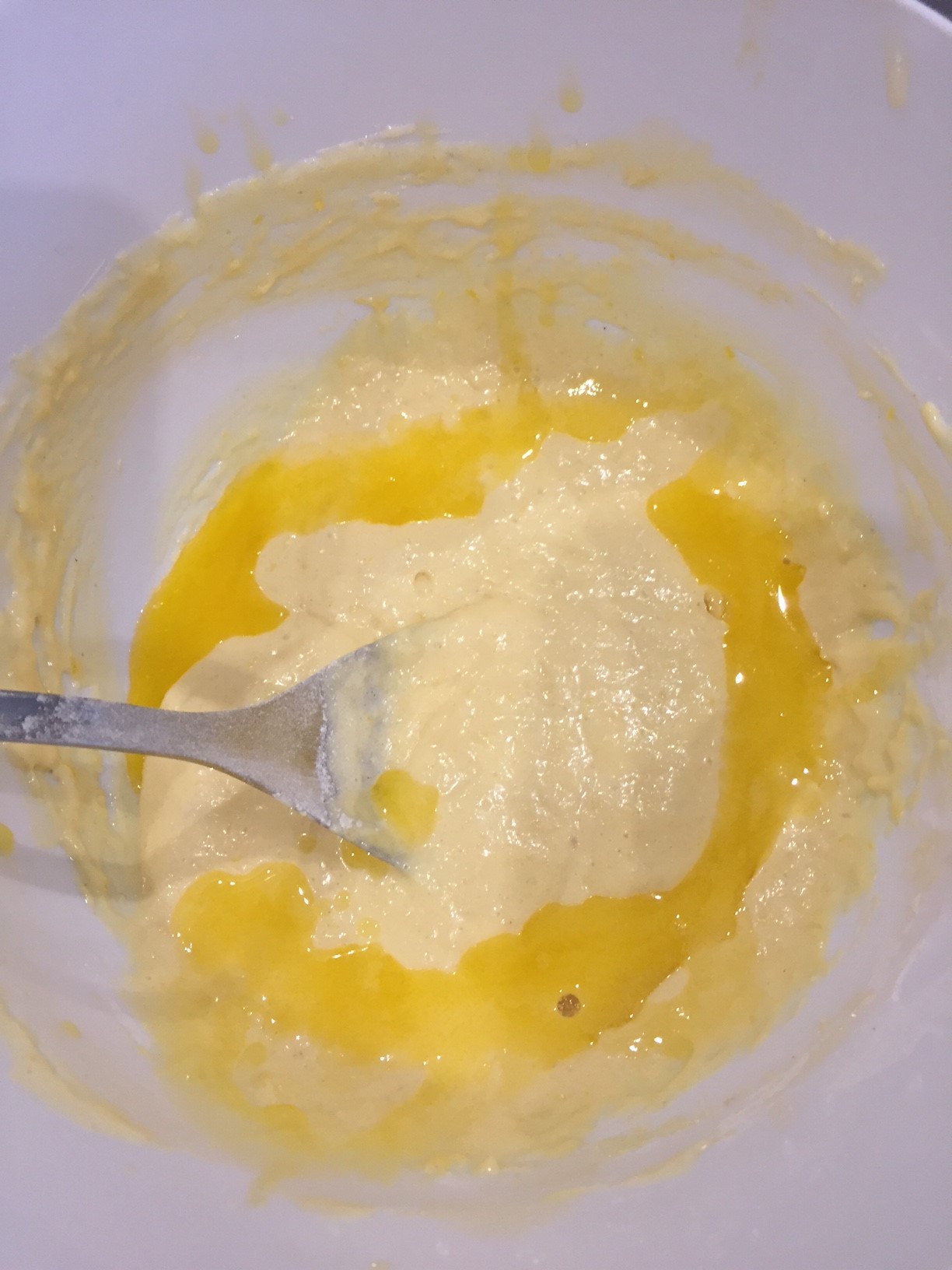 You can see the batter is thicker after the first folding and this is the second fold. I use a large metal spoon when folding..

Next, use a dessert spoon to transfer the mixture into the prepared tin. Usually you spoon enough to have it just level with the top of the tray, but I would say have the mixture just below the rim of the tray so you don’t get any crusty edges. 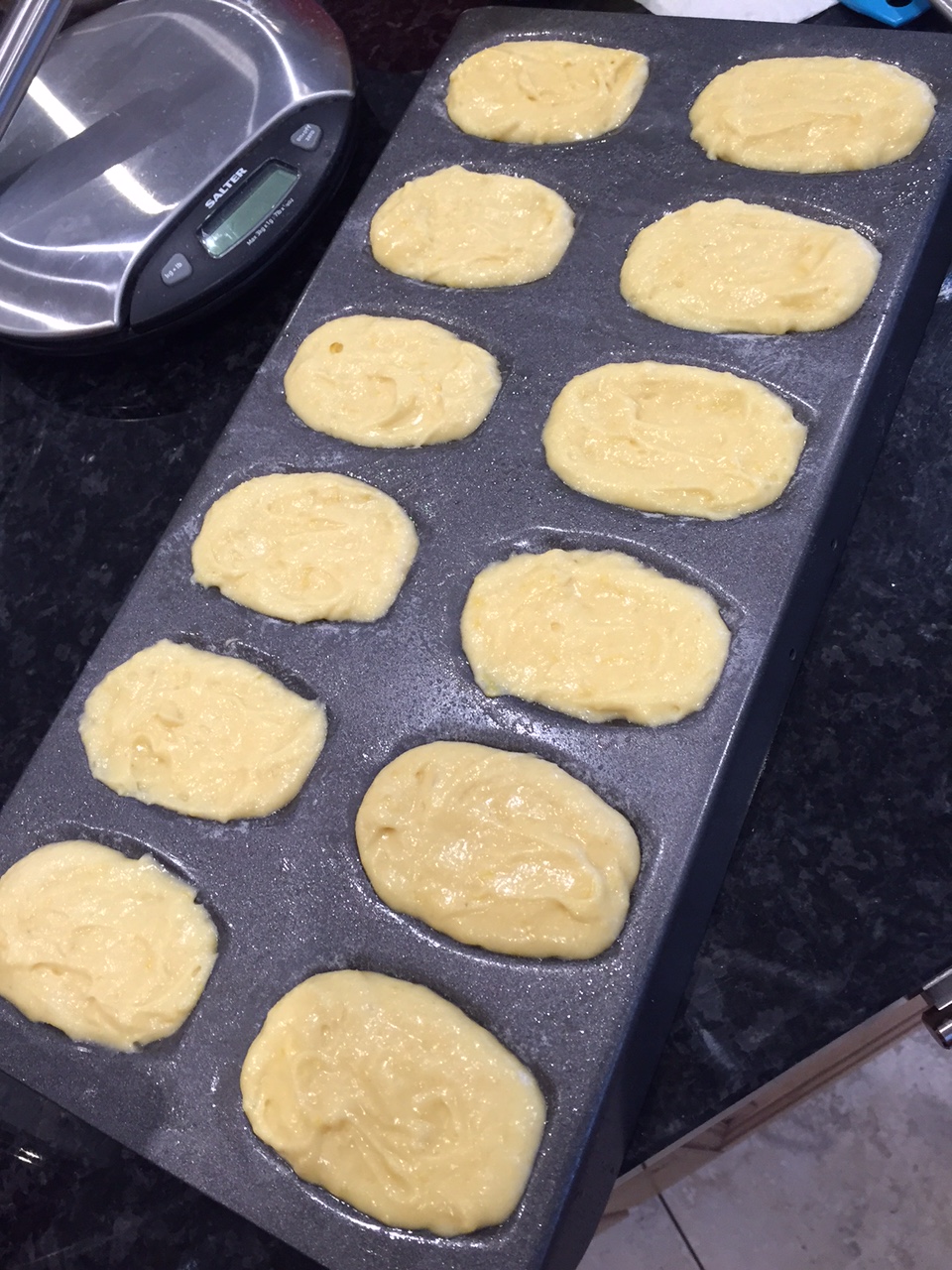 Ready for the oven but maybe piled a little too much! Also gently ease the mixture to the very top and bottom of the tins to get the lovely shell shape.

Bake in the pre heated oven for about 8-10 mins until well risen, golden and springy. Mine took 8 mins. Remove from the oven and ease them gently out of the tin with a palette knife and cool them on a wire rack. If you have made the full recipe, grease and flour the tins again and repeat until all the mixture has been used up. 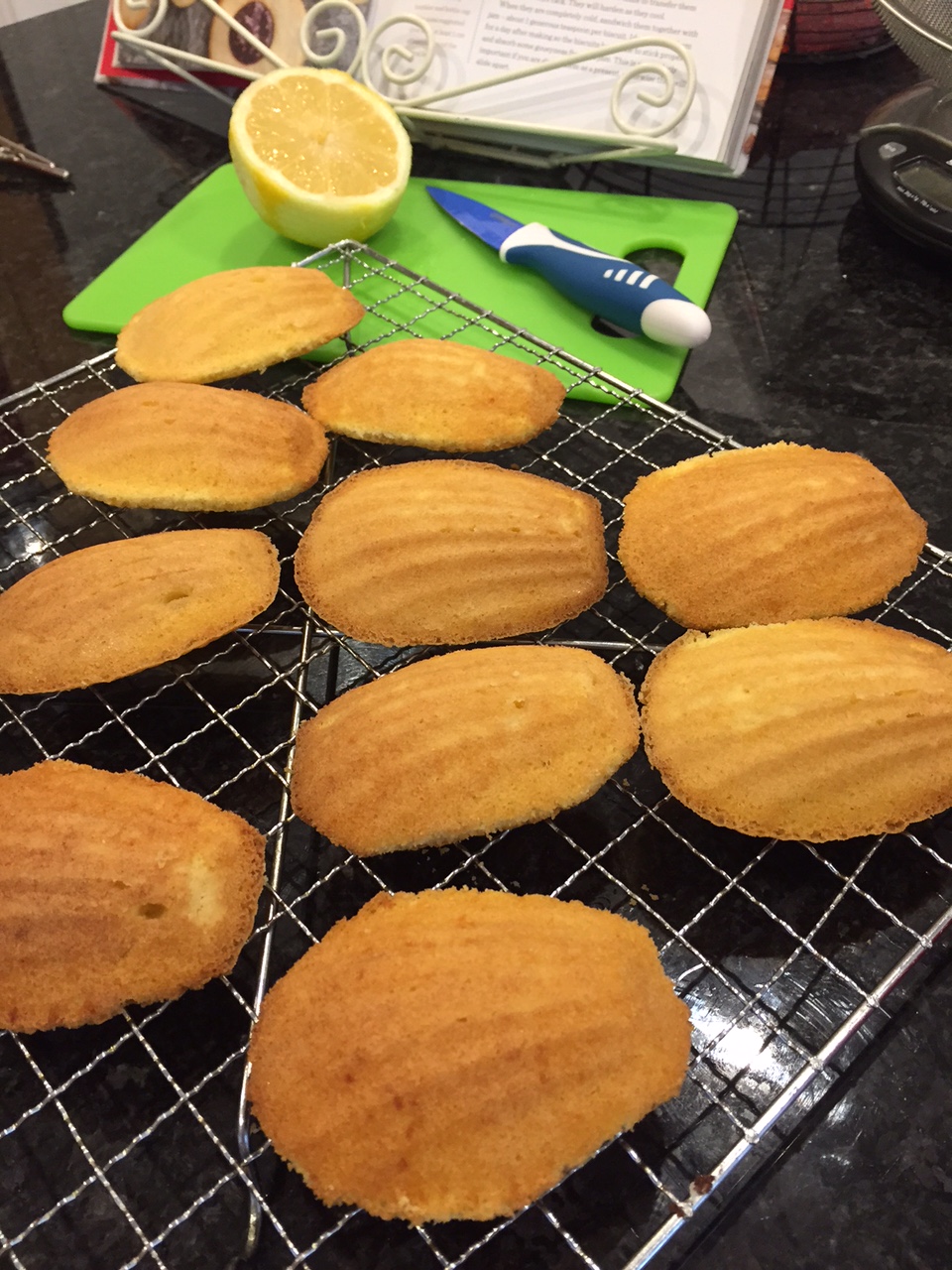 The finished Madeleines above look very pretty but in my mind, they were crying out for something a little more so I mixed some icing sugar with lemon juice and drizzled this over them just to add a little more lemon flavour without over powering the delicate lemon flavoured sponge shells. 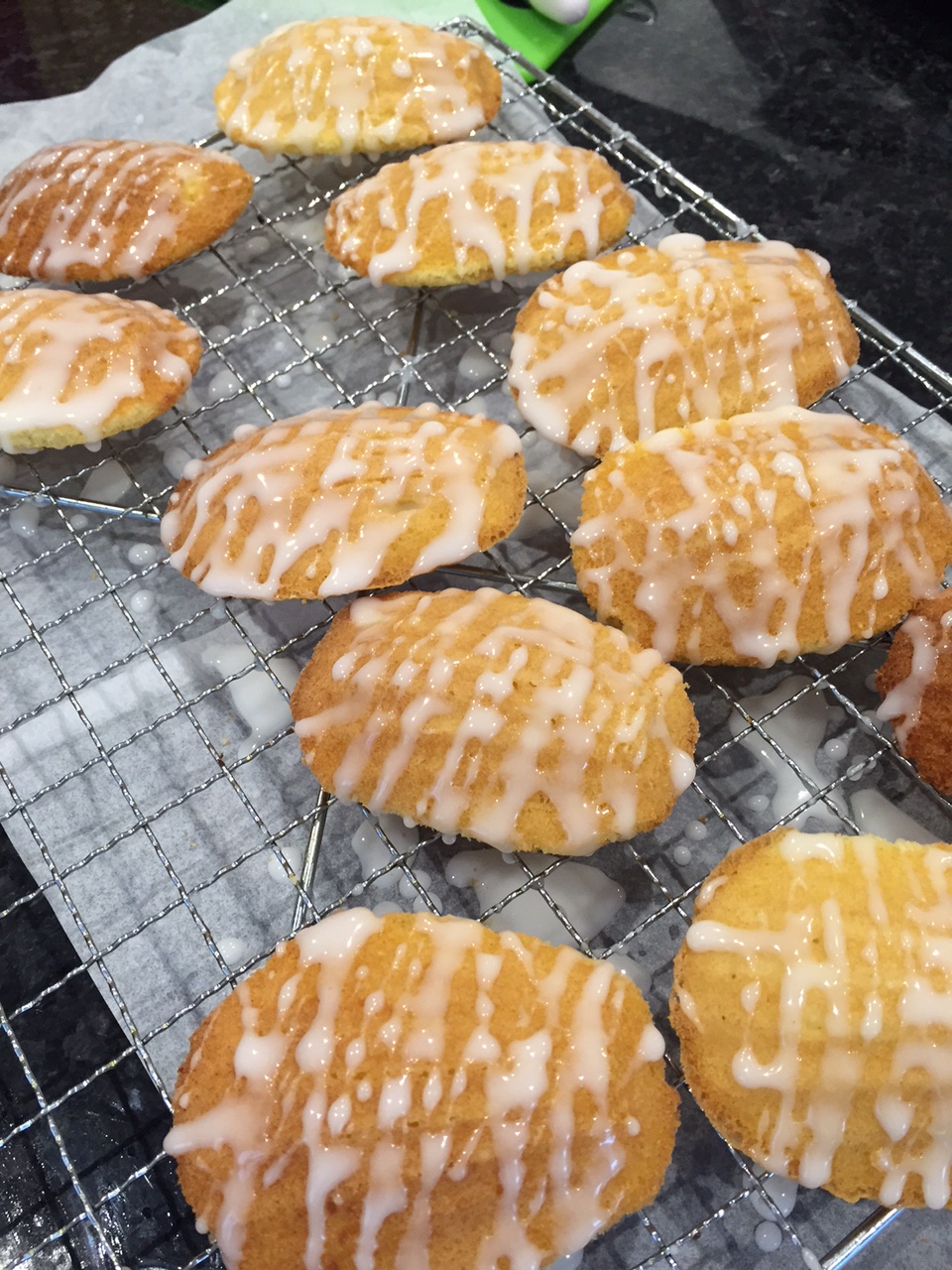 Adapted from a Mary Berry recipe.

Remember to bake with love